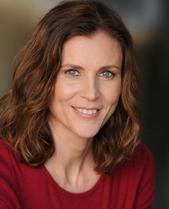 Nadia is an actress, writer, and award winning dancer & choreographer.

She trained in flamenco and ballet at the Royal Conservatory of Dance and Drama in Madrid, Spain, and earned her BA in Theatre at the University of Colorado in the US.

When Nadia was 14 she was in a car accident that injured her spinal cord and which requires her to walk with a cane. She hasn't let this impede her career. Nadia has taken every opportunity to find ways of working in the performing arts and challenging others’ notions of diversity and inclusion.

Nadia's acting credits include theatre, commercials and independent film projects in the UK, Spain, the US and Canada. Her latest role, a lead in Filum, was directed by Claudia Hernández Barragán; Filum received the 2019 Audience Award at the ARFF-Berlin.

As a dancer Nadia was a company member with CandoCo in the UK, AXIS Dance in the US, and Compañía Y in Spain. She has been featured in works by Stephen Petronio, Bill T. Jones, Arthur Pita, Rafael Bonachela, Davis Robertson, Sonya Delwaide, Chevi Muraday and Asun Noales among others. She performed at the Kennedy Centre (USA) with Mikhail Baryshnikov and has toured North America, Europe and the Middle East. She received the Isadora Duncan Dance Award for best ensemble performance with Jacques Poulin-Denis. One of the many works Nadia has choreographed, Marionette, was selected for competition at the prestigious XVI Certamen Coreográfico in Spain.

Nadia is currently writing her second feature film and her first TV show. She is looking forward to two new projects that will take her to California and Sweden in the summer of 2021.​